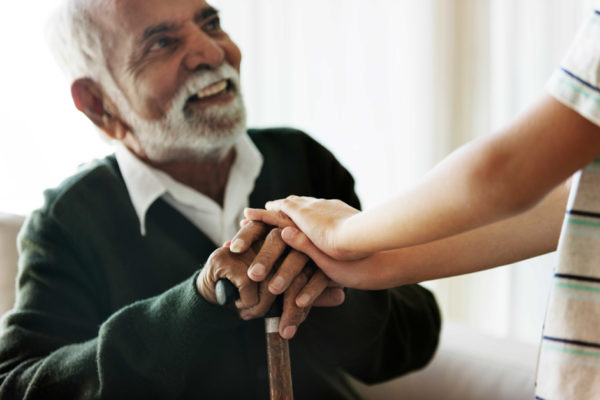 The Senior Alliance acts as a connection point to resources, services, and programs in the community for older adults and their caregivers. We also oversee a network of service providers, in addition to providing programs and services ourselves. Jason Maciejewski, chief advocacy and planning officer of The Senior Alliance, describes how The Senior Alliance came into being and how it operates today.

Jason Maciejewski (00:20):
Yes, I’ve been with The Senior Alliance for 11 years. Prior to that, I worked on legislative staff in the state house of representatives and as a government relations manager in county government. At The Senior Alliance, I’m responsible for planning activities that are related to the Older Americans Act funded programs that we operate. And I’m also responsible for all aspects of advocacy at the agency on behalf of older adults, caregivers, and people living with a disability.

Jason Maciejewski (00:49):
Area Agencies on Aging were created by the Older Americans Act, which was originally passed in 1965 through an amendment in 1974. These local entities that we know as Area Agencies on Aging or triple A’s as we call them were created. And you can think of them as like a legislative district. So everybody in the US lives within an Area Agency on Aging service area. Um, but they probably don’t know it because you don’t really realize it until you actually need the services. There are 622 Area Agencies on Aging across the country. And there are 16 in the state of Michigan. We’re designated by the state. So the state of Michigan decided at one point that they were going to be 16 of them in what territory is we’re going to cover. People mostly think of meals on wheels when they think of senior services. And that’s just one of the programs that we operate as an Area Agency on Aging. We’re a connection to a variety of aging programs and resources for people. Some of them, we operate, some of them we contract out like meals on wheels, and we’re also responsible to tell the state what we’re going to do with the public dollars that we receive through a multi-year planning process, which is one of the things that I do in my job. We’re also a MI Choice Waiver agent, which is a separate function from the Area Agency on Aging’s traditional role under Older Americans Act programs, but really an important part of what we do to help people stay in their homes.

Speaker 1 (02:19):
How was The Senior Alliance created? And is it different from other Area Agencies on Aging?

Jason Maciejewski (02:24):
Yeah, we’re a little bit different in terms of how we were created. So originally our Agencies on Aging were authorized in 1974. The Senior Alliance didn’t come into being until 1980 and it was agreement between the then mayor of Detroit Coleman Young and the, then mayor of Livonia Ed McNamara who agreed to divide the County into two different service areas. So, The Senior Alliance covers the suburban and downriver communities in Wayne County and the Detroit Area Agency on Aging covers the city of Detroit, the Gross Points, Hamtramck, Highland Park, and Harper Woods. This is unusual because in the state of Michigan, all the other Area Agencies on Aging are either multi-county or in the case of Kalamazoo, single county. We’re also a nonprofit 501C3 agency. Not all Area Agencies on Aging are, some are part of county government. Some are actually connected to quasi-governmental agencies. So although we’re a 501C3 now we’re slightly different from all the others. We’re also not a Title 6 agency, which is a native American title in federal statute. We do not deal with a tribal entity in our service area. We also have a reputation as being an innovative agency. We’ve participated in some pilot projects in the past, including the community-based care transitions program, which was funded through a contract with the center for Medicaid and Medicare services.

Speaker 1
What role do you play for people?

Jason Maciejewski
As an Area Agency on Aging, where first and foremost, that connection point to resources, services and programs in the community for older adults and their caregivers. We have an oversight responsibility for contractors of Older Americans Act programs, including things like meals on wheels, legal aid, evidence-based programs, adult daycare, transportation services. So we oversee that network of vendors that are supplying services in the community.
And as I said earlier, some of the things that we do are directly operate programs, including the MI Choice Waiver program. We housed the long-term care ombudsman in our office. We operate a care management program, a program called that we call MAP that helps people make informed choices about their Medicare plans and part D prescriptions. We also operate a transportation program and information and assistance, which is that call center where people can call and get information on program services and referrals to other agencies. One of the primary roles that we play through the Older Americans Act, however, is advocacy. We are charged with being that voice for the aging community in Lansing and in Washington and advocating on behalf of policies and laws and administrative rules that impact older adults and people living with the disability.

Speaker 1 (05:17):
Now who typically utilizes your programs and services and resources?

Jason Maciejewski (05:20):
We have a variety of people we interact with in the community, uh, primarily older adults and it’s defined as people aged 60 and over under the Older Americans Act, that’s the definition of a senior in terms of most of our programs, but we also work a lot with caregivers, people that contact us regarding a parent, a loved one, even a neighbor for resources and services. And we also deal with professionals, social workers, nurses, discharge planners at the hospital, people that are calling us on behalf of somebody that they have as a client who is in a situation where they might need services or some additional help.

Speaker 1
Do you work with healthcare providers and in-home service companies?

Jason Maciejewski
Yes, we do. Through our long-term services and support programs, like MI Choice Waiver, my health link and care management. We work with a series of contracted vendors to deliver services in home.

Jason Maciejewski (06:11):
Our role is to really oversee from a contract perspective, the work that those agencies are doing in the field, and we do this on a three-year contracting cycle. So when we go through a multi-year planning process, we in essence bid out for companies to provide services in those programs and oversee them from a contract management perspective. On the Waiver, we actually do kind of a case coordination support management piece as well. One program that we operated in partnership with healthcare was called the community-based care transitions program, where CCTP, as it was known, we operated that for five years from about 2012 to 2017. And we worked with six hospitals in Wayne County to help older adults transition from a hospital admission back into their home environment. And the goal there was to reduce the 30 day readmission rate. And we were able to do that quite successfully with over 32,000 people, driving the readmission rate for them from their baseline of about 23% down to around 15%. So we had some great success, uh, in doing that kind of work in partnership with health care.

Speaker 1 (07:21):
So, what’s your relationship to the state and federal governments?

Jason Maciejewski (07:23):
As an Area Agency on Aging, we report to a state unit on aging and in Michigan, it’s known as the Aging and Adult Services Agency, an acronym that we pronounce as AASA and AASA is responsible for setting the standards related to programs and services that we offer. They are responsible to a state commission on aging, which is appointed by the governor who ultimately approves all of those standards. They also approve our multi-year plan as an individual Area Agency on Aging. On the federal level, there’s the Administration on Community Living known as ACL, and they are the lead agency or organization in terms of aging for the entire country. It’s important to note that Area Agencies on Aging have their own status under the Older Americans Act specifically mentioned and created as in noted as the point of delivery for services to older adults.

Speaker 1 (08:20):
Now, advocacy is one of the roles of an Area Agency on Aging. How does The Senior Alliance advocate for older adults?

Jason Maciejewski (08:27):
Yeah, so we advocate on a variety of levels. Locally, we work with municipal governments who support and play a role in the governing of our agency. Anything from supporting a CDBG project for a sidewalk repairs, through a letter of support, to senior center staffing funding that we might offer, all the way up to state level, where we would advocate on behalf of bills that are in the legislature and potentially administrative rules that would be issued by the department of health and human services. So I personally spend a fair amount of time in Lansing, at committee hearings. I’ve testified before the appropriations committees in the House and the Senate on budget bills related to Area Agencies on Aging and the programs that we offer. Uh, I also put out advocacy alerts to stakeholders in our network when there is a piece of legislation or some public input that’s being requested.

Jason Maciejewski (09:22):
We put that information out to our community to make sure that they call legislators or write into the particular department about an issue. We have a monthly advocacy newsletter called Colloquy that goes out by email once a month, that gives a quick update on some of the things that are going on in aging advocacy. And anybody can subscribe to that by sending an email to advocacy@thesenioralliance.org. We also work through our statewide association known as the Area Agency on Aging Association of Michigan or 4AM, is the acronym there. We also have a statewide advocacy, uh, group of volunteers known as the Michigan Senior Advocates Council, and they meet monthly in Lansing and then meet with legislators to talk about issues that impact older adults. And we actually have openings on the MSAC body right now in our service area. And one of the major events that we do is called older Michiganians Day, where we bring the voice of older adults, right to the East lawn of the state Capitol building. And they meet with legislators and talk about bills that are before our state government. And we do that every year in May. And it’s a great opportunity for people to get up to the Capitol and make their voice heard.

Speaker 1 (10:35):
Do you give presentations to community organizations?

Jason Maciejewski (10:38):
Yes, we do so regularly. Uh, I’ve spoken to professional organizations, chambers of commerce, community groups at senior centers. Uh, really anybody that’s interested in learning more about resources and services that are available for older adults, we will go out and talk to them. We’re actually reaching out to more faith-based communities right now to try and make that connection as well as we know that they interact with a lot of the population that we do. So anybody that wants to have us come out, we’re happy to do it.

Speaker 1 (11:06):
Where can I get more information on all the programs and services and resources from The Senior Alliance?

Jason Maciejewski (11:11):
That’s probably the easiest way to do that is to call our information and assistance line, which is +1 800-815-1112. You can also look us up on the internet at thesenioralliance.org. We also have a Facebook page, which you can reach by searching The Senior Alliance on Facebook. We’re actually on Twitter as well @AAA1C. And as I mentioned earlier, you can always email me directly about advocacy or anything else at The Senior Alliance, through the email address of advocacy@thesenioralliance.org